1. On all roads subject to traffic legislation, motor vehicle traffic and road safety, as a general rule, overtaking must be carried out on the left of the vehicle to be passed (article 32.1 of the articulated text).

2. By exception, and if there is enough space to do so, overtaking can be done on the right by taking the utmost precautions, when the driver of the vehicle to be overtaken is clearly indicating their intention to change direction to the left or stop on that side, on roads with vehicles moving in both directions, as well as with trams that cross the central zone (article 32.2 of the articulated text). 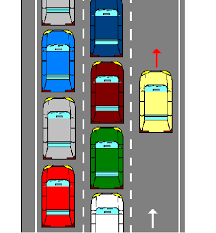 Remember to leave a safe distance between both vehicles before overtaking, many vehicles stick to the back of the vehicle they intend to overtake creating a risky situation.

If the vehicle does not indicate its purpose of turning to the left overtaking on the right is forbidden.

The separation of one and a half metres is only for people, cyclists and vehicles with animals pulling them.

The use of the horn or lights, is justified in this case provided it is done moderately and only to warn of our presence and intention to overtake the driver of the vehicle in front.

3. Within populated areas, on roads that have at least two lanes reserved for traffic in the same direction of travel, separated by longitudinal marks, overtaking is allowed on the right-hand side provided that the driver of the vehicle that makes the manoeuvre is sure beforehand that they can do it without endangering others. 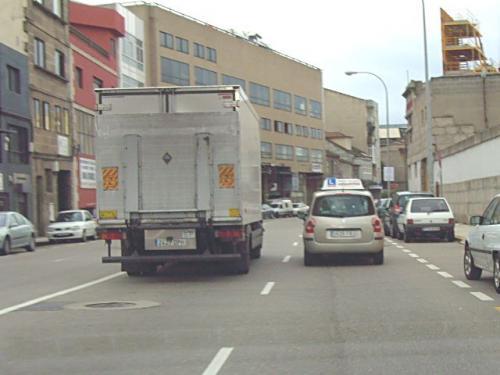 4. In all cases in which overtaking involves a sideways movement, the driver must warn before making the manoeuvre by means of the corresponding optical signal referred to in article 109.

5. Infringements of the rules of these requirements will be considered a serious matter, as foreseen in article 65.4.c) of the articulated text. Please note that the reference to article 65.4.c) must be understood as made to article 65.4.a), as established in the third final provision of this Regulation, introduced by section ten of the single article of the R.D. 965/2006, of September 1, by which the General Regulation of Circulation is modified, approved by R.D. 1428/2003, of November 21 (“B.O.E.” September 5).

Home » SECTION II ABOUT THE MOVEMENT OF VEHICLES » CHAPTER VII OVERTAKING » SECTION 1 OVERTAKING AND PARALLEL DRIVING » Article 82 Overtaking on the left. Exceptions
a
← SECTION 1 OVERTAKING AND PARALLEL DRIVING ← Article 83 Advancement on multi-lane roads
Manage Cookie Consent
To provide the best experiences, we use technologies like cookies to store and/or access device information. Personal data will be used for personalization of ads and that cookies may be used for personalized and non-personalized advertising. Consenting to these technologies will allow us to process data such as browsing behaviour or unique IDs on this site. Not consenting or withdrawing consent, may adversely affect certain features and functions.