1. Tests for the detection of narcotic drugs, psychotropic drugs, stimulants or other analogous substances, as well as the persons obliged to fulfil them, shall comply with the provisions of the following paragraphs:

A) The tests will normally consist of the medical examination of the liable party, and of the clinical analyses that the forensic doctor or other experienced appointee, or medical staff of the health centre or medical institute to which the person is transferred, deem most appropriate.

At the request of the interested party or by order of the judicial authority, the tests may be repeated for purposes of verification, which may consist of blood, urine or other similar tests.

B) Any person who is in a situation similar to any of those enumerated in article 21, with respect to the investigation of the blood alcohol, is obliged to submit to the tests indicated in the previous paragraph. In cases of refusal to carry out such tests, the officer can proceed to the immediate immobilization of the vehicle.

C) The officer of the authority in charge of traffic surveillance, who notices obvious symptoms or signs that reasonably denote the presence of any of the substances mentioned in the previous article in the body of the persons referred to shall comply with the provisions of the Law of Criminal Procedure and, as necessary, in its case, the judicial authority, and shall adapt their behaviour, as far as possible, to the provisions of this regulation for tests for alcohol detection. 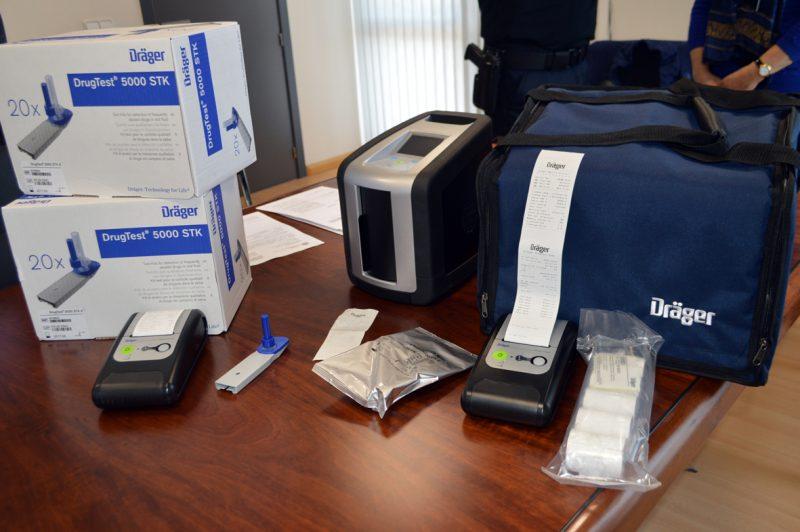 D) The competent authority shall determine the programs to carry out preventive controls for the testing of narcotic drugs, psychotropic drugs, stimulants or other similar substances in the body of any driver.

The DGT has acquired drug test kits for traffic police officers, for which the test will consist of taking a sample of saliva, which, after waiting 5 minutes, will give a result. In case of lack of the kit to carry out the test, the police officer could proceed to transfer the driver to a health centre if the driver shows obvious evidence of having taken this type of substance.

It will be the authorities, and not the police, that determine the campaigns to be carried out to prevent the consumption of these substances.

2. Infractions of this rule relating to driving under the influence of narcotic drugs, psychotropic drugs, stimulants or other similar substances, as well as the violation of the obligation to undergo tests for detection, will be considered as very serious infractions.

Home » SECTION I GENERAL RULES OF DRIVING BEHAVIOUR » CHAPTER V RULES ON NARCOTIC DRUGS, PSYCHOTROPIC DRUGS, STIMULANTS OR OTHER ANALOGOUS SUBSTANCES » Article 28 Tests for the detection of narcotic, psychotropic, stimulant or other similar substances
a
← Article 27 Narcotic drugs, psychotropic substances, stimulants or other similar substances ← SECTION II ABOUT THE MOVEMENT OF VEHICLES
Manage Cookie Consent
To provide the best experiences, we use technologies like cookies to store and/or access device information. Personal data will be used for personalization of ads and that cookies may be used for personalized and non-personalized advertising. Consenting to these technologies will allow us to process data such as browsing behaviour or unique IDs on this site. Not consenting or withdrawing consent, may adversely affect certain features and functions.